The Eagle, the Flag, the Weights, and the Path to Freedom 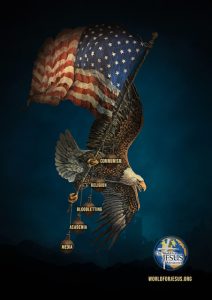 -Religion/spirit of compromise (Islamic infiltration/CC/Communism and radicalism. Each deeply impacts the Church) 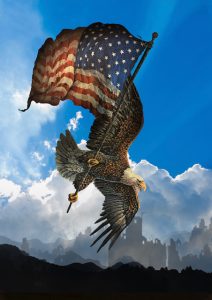 I heard a sonic boom as the Eagle completed his flight across America and then he continued his flight around the world. As he entered the border of the next nation, another sonic boom could be heard, and I would witness the spirit of communism break off that nation. With each passage, the Eagle brought strength and freedom to the people of that nation.

On July 7, 2021, President Trump filed a lawsuit against big tech. That morning, the Lord spoke clearly “The first ball (media) is about to fall.” Since then, numerous lawsuits have been filed against media outlets by key individuals- Kash Patel, Project Veritas (James O’keefe), and the list goes on… each filing defamation lawsuits against MSM.

Monday September 27, 2021, in the early hours of the morning, I heard a loud explosion in the spirit. There was chaos following the explosion, however, I felt no fear. It was not long after that that the Lord showed me President Trump roll out the plans the Lord had handed him for this nation. Then, I had a vision of Biden trapped in a makeshift Whitehouse with no possibility of escape.

Why do I share these additional visions? We must see how God is handling the situation, he is systematically exposing and uprooting decades of deep state corruption.

This is a long and arduous process, one that requires a deep work to unearth. However, what is unearthed, will set those bound to the corruption free once and for all. We will see the Eagle fly victorious once again! This will be birthed through prayer and then realized in the nation.

The Ecclesia has come to learn the tragedy of a nation built up without God, it will ultimately fall to tyranny. America was created in Covenant by those who fled tyranny. From the Frenchman Jean Ribault who led the Huguenots, to our Founding Fathers, nearly 200 years of fleeing tyranny to establish a land wherein all men could be created equal and have the freedom to worship God!

The Declaration of Independence and the US Constitution were both written to protect us from that very thing…Tyranny. We’ve lived under this tyranny long enough, it’s time to see things from God’s perspective. He is revealing everything to us so we can take a stand and fight against the corruption partnering with Him to bring our nation back to God!

There’s more to come on the five weights listed above, and how we, as the children of God, can stand for righteousness while resisting tyranny!

Quick Access
Upcoming Events
There are no upcoming events at this time.
Stay In Touch
Sign up for our weekly e-news and receive weekly Teachings, Prophetic Insight, Schedule of Events, urgent National Prayer Requests, and so much more! We have both English and Chinese translations available!
Cart
Calling all Intercessors…