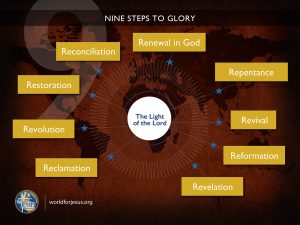 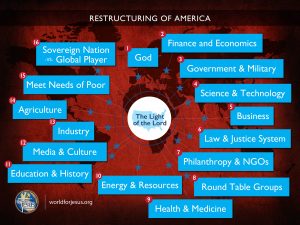 What does it mean to pray for the 9 R’s?

The seven R’s – Repentance, Revival, Revolution, Reformation, Reclamation, Revelation, and Reconciliation – are what, through prayer, we all are birthing into this nation. We are birthing God’s forgiveness into this nation each time we repent and birthing His Restoration. He is re-constituting this nation. We must pray constantly for The Constitution – regularly, every day – because that is what those who are trying to destroy America are tearing apart.

The battle is intense, but we will see the fullness of revival flowing across this nation. God is going to release, in this hour, a level of Jubilee anointing, Isaiah 61, to take the Church out of bondage and, literally, into its maturity.

Nita asked the Lord what brought Him the greatest pleasure? This was His answer:

How can we rebuild the ruins in faith?

As a ministry, World for Jesus has spent 21 years dismantling the enemy’s plans through repentance, tearing down strongholds as The Lord has directed. The Lord knows how to bring us thru and into our ordained destiny as a nation. America is like a child who has a great destiny, but she has not learned how to keep her flesh under control in order to obtain that destiny. We have a good and loving Father who is saying, “I have a child (America) who has all the qualities to be great so I am going to help her so she can fulfill her destiny.”

The Father has spoken His Heart for America. He said, “I have given America to be free!” The Father has given America to the Church, but we must take it and reign in it and maintain it. We are here in this time and season to stand in the gap. We, must do our part to see this nation stand in the righteousness of God – “one nation, under God.” He has instructed us: “You are to rebuild the ruins in faith.”

And your ancient ruins shall be rebuilt: you shall raise up the foundations of [buildings that have laid waste for] many generations: and you shall be called the repairer of the breach, the restorer of streets to dwell in.

Our job is to rebuild – recreating, rebuilding this nation in faith. He is speaking: “Rebuild! Rebuild! Prepare ye the way of The Lord. Make the way straight for His Glorious Reign!”

…Prepare in the wilderness the way of the LORD – clear away the obstacles – make straight and smooth in the desert a highway for our God!

Every valley shall be lifted and filled up, and every mountain and hill shall be made low; and the crooked and uneven shall be made straight and level, and the rough places a plain. And the glory – majesty and splendor – of the LORD shall be revealed. Isaiah 40:3-5a AMP

He spoke to Nita and told her, “I will help you rebuild if you will let me.” So under His Leadership, we pray, we proclaim, we decree, we declare until His Glory comes, and churches on fire are filling this land, until the righteous and upright are filling the government offices, until our children are safe in the educational structure of this land, Jesus is Lord of this nation.