“The Hurricane of Justice and the Destiny of the Nation”

The Lord woke me at 4 am sharp. I was worshiping the Lord while I gathered my things to sit before Him. I sat down and was immediately taken up and into a spiritual experience.

The Lord pulled me up and I was taken up over the Nation. We were face to face with a hurricane. 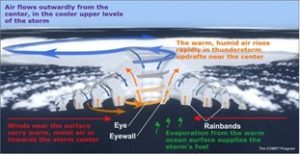 I was taken INTO the Lord, and we began to pass through these intense storms. They were the rings or rainbands of the hurricane. Each band was miles wide/thick, the next one more intense than the one before it (as we can see in this illustration). There were brief periods of calm, and then we’d move forward.

I was anchored in Him, so the winds that surrounded me did not affect me. I could see them, I saw the rain, I saw the thunder and lightning, but I was completely sheltered under the wing of the Almighty.

This pathway through the rainbands, with each storm stronger than the previous continued until we passed through seven bands.

Then we were in the center, the eye of the storm. I was in Him. I don’t know how to describe this other than I was in Him. Doves flew around us, I could see the massive ring of the storm I’d just come through, but I was safe, IN my Creator. I didn’t even realize how significant that was, until I looked back, it was black with intensity.

The Lord pulled me closer, I was already in Him, but I felt a tightening. Then, a great dread began to fall upon me and we (the Lord, with me IN HIM) began moving forward through the rainband. We went through the seven storms, each storm reducing in size, but each ring brought greater levels of this dread, fear, and awe of the LORD- Jehovah, the Righteous Judge, until we were through it on the other side.

I wanted to fall on my face as His righteousness was so prevalent.

He said: “JUSTICE. IS. COMING … “ I felt these words reverberate through my body. It was the voice of thunder.

I asked the Lord (I said no words, the terror of the LORD was upon me, but He knew my thoughts) what we just passed through.

“Justice is Coming” there will be seven waves of Justice coming to the nation and when it comes, it will sweep across this land. We will all feel the justice of God as He brings it down upon our land. Those in Him, anchored, will be safe and protected.

The seven waves of Justice

He did not tell me the order these will occur in, He dropped them in my spirit and that was all.

Numbers 13 and 14 speak of the entrance of the Nation of Israel into the promised land.

Numbers 14 details the events that follow. Joshua, Caleb, Moses and Aaron fall to their faces before the assembly, identificational repentance was, and still is, key.

“ Then Moses and Aaron fell on their faces before all the assembly of the congregation of the children of Israel.

And Joshua the son of Nun, and Caleb the son of Jephunneh, which were of them that searched the land, rent their clothes: and they spake unto all the company of the children of Israel, saying, The land, which we passed through to search it, is an exceeding good land.  If the Lord delight in us, then he will bring us into this land, and give it us; a land which floweth with milk and honey.  Only rebel not ye against the Lord, neither fear ye the people of the land; for they are bread for us: their defence is departed from them, and the Lord is with us: fear them not.  But all the congregation bade stone them with stones. And the glory of the Lord appeared in the tabernacle of the congregation before all the children of Israel.

And the Lord said unto Moses, How long will this people provoke me? and how long will it be ere they believe me, for all the signs which I have shewed among them? I will smite them with the pestilence, and disinherit them, and will make of thee a greater nation and mightier than they.”

Because of the repentance of Moses, Joshua, Caleb and Aaron, God relented.

God in His mercy is calling upon His children in this hour, to believe in the Destiny of our Nation. He is calling us to stand up for the hope and vision of the Lord for our land. “I will restore her, I will bring justice, I will reign down My glory upon this nation! My Holy JUSTICE is coming!” saith the Lord God!

Friends, we must not stand in agreement with the lies of the enemy, we must continue to hold the Line in the midst of the most intense storm this nation has experienced since the revolutionary and civil wars. What Line? The line of Justice and Righteousness.

2022 is the year of the catalyst, in it, God will begin to break the chains of oppression off the neck of the people.

Justice and righteousness will come forth! We must press in and press on!

Quick Access
Upcoming Events
Non ci sono eventi in arrivo al momento.
Stay In Touch
Sign up for our weekly e-news and receive weekly Teachings, Prophetic Insight, Schedule of Events, urgent National Prayer Requests, and so much more! We have both English and Chinese translations available!
Cart
Calling all Intercessors…